Have you ever wondered what a camera obscura actually is and where the idea came from? Well, you’ve come to the right place! We’re going to peer through the lens of time and take a look at the history of the famous camera obscura.

In its simplest form, a camera obscura is a dark room with a small hole in one wall. When it’s bright outside, light enters through the hole and projects an upside down image of the outside world onto the wall opposite the hole. Did you know that the name camera obscura is actually Latin and translates to "dark chamber"?

Our Camera Obscura is a little more complex than this, but it’s based on the same principle. We have a mirror at the top of our tower which is angled to reflect light down a large tube which contains three lenses. These lenses focus the light onto a white wooden table, projecting an image of the view outside. The mirror tilts and rotates allowing us to see a 360-degree view of Edinburgh and the lenses allow us to see the image the right way up. 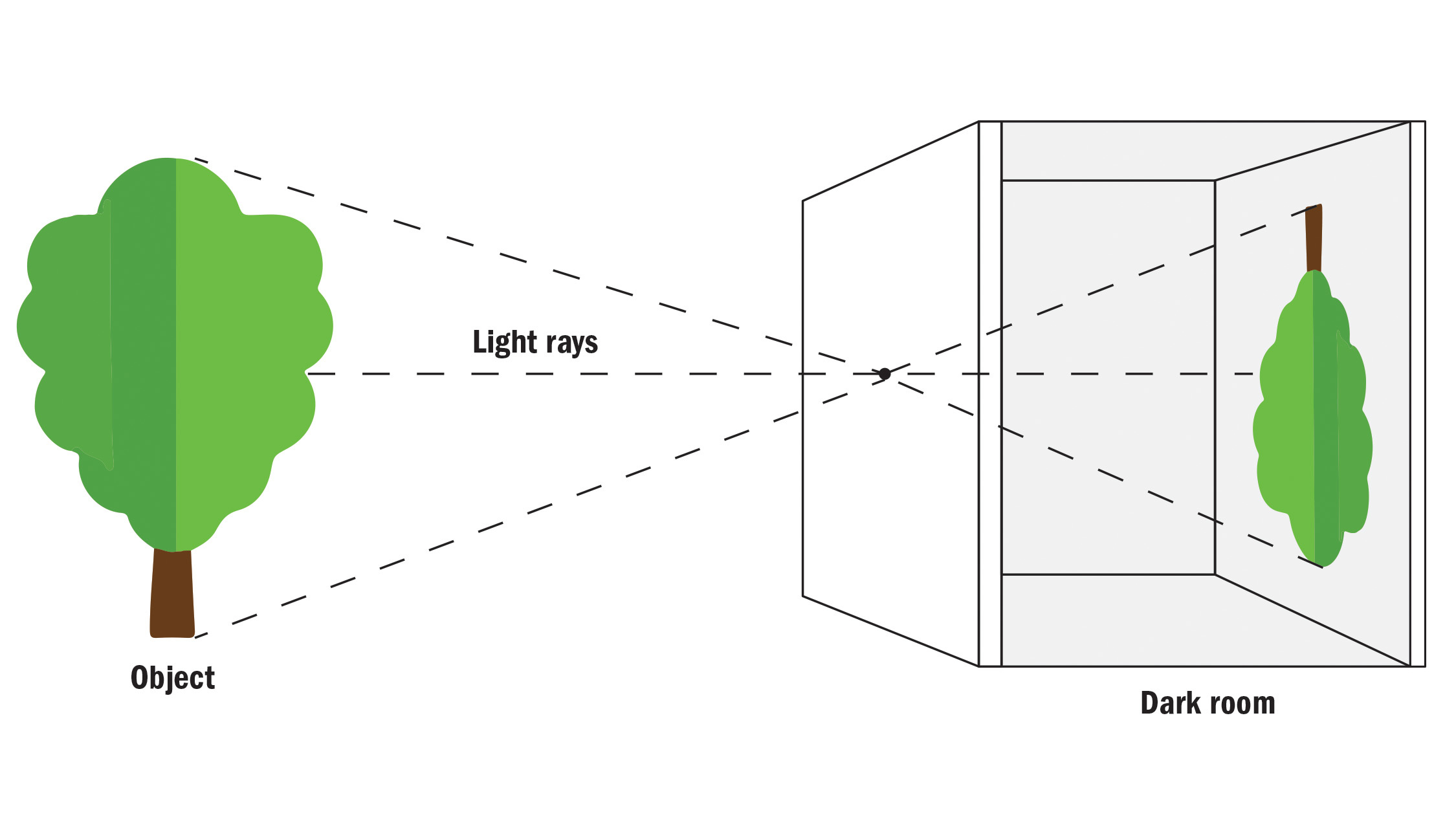 Our Camera Obscura isn’t the only one in existence. In fact, camera obscuras date back to as far as 400BC, possibly even before records existed.

The earliest known written account of a camera obscura was provided by a Chinese philosopher called Mo-tzu (or Mozi) in 400BC. He noted that light from an illuminated object that passed through a pinhole into a dark room created an inverted image of the original object.

In the 4th century BC, the Greek philosopher Aristotle realised that a partial eclipse could be viewed by looking at the ground beneath a tree. The crescent shape of the partially eclipsed sun projected onto the ground through the holes in a sieve and through the gaps between the leaves allowing him to view it safely.

Several other scientists experimented with light passing through a small hole, but it wasn’t until the 11th century that a viewing screen was used to see the inverted image. Alhazen (or Ibn al-Haytham) is said to have actually invented the camera obscura, as well as the pinhole camera which is based on the same idea. He carried out experiments with candles and described how the image is formed by rays of light travelling in straight lines. 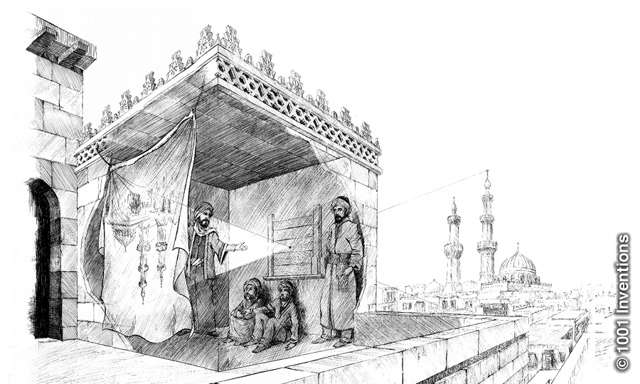 Four centuries later Leonardo da Vinci (1452–1519) suggested that the human eye is like a camera obscura. He went on to publish the first clear description of the camera obscura in Codex Atlanticus (1502).

Up until this point in time, the camera obscura had been described, but it wasn’t actually improved upon until an Italian scholar named Giambattista della Porta (1535 - 1615) came along and added a concave lens near to where light enters the pinhole. 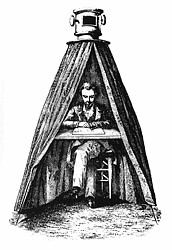 So now the camera obscura had been described, named and even improved upon, but it was still quite a large object to carry around. This led to a portable box-like version being created, which was used by many artists in the 17th and 18th centuries, such as Vermeer and Canaletto.

In Victorian times, larger camera obscuras became a popular seaside attraction, allowing groups of people to experience the phenomenon together. It was at this time that our Camera Obscura story begins. In 1835 Maria Theresa Short set up a “popular observatory” on Calton Hill in Edinburgh. She ran demonstrations of the Camera Obscura right up until 9pm every day. After breaking council rules for leafletting, she was unfortunately evicted in 1849. But this didn’t stop her, Maria purchased a new property on Castlehill, added two additional floors and opened up Short’s Observatory in 1853 which housed the Camera Obscura that we are still running today! 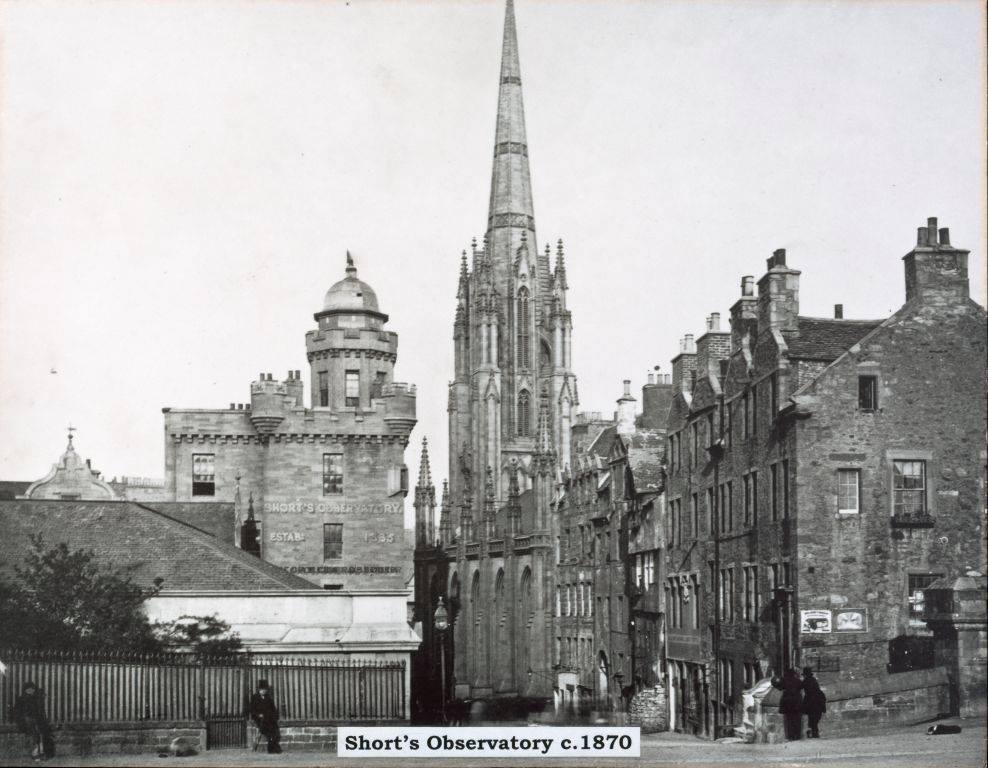 When Maria passed away, the building was taken over by Sir Patrick Geddes who renamed it the Outlook Tower, deciding to refocus the Camera Obscura away from tourism and onto education and philosophy. He would rush people up the five flights of stairs to stimulate blood flow and oxygen to the brain – opening peoples’ minds and allowing them to get more from the experience.

Edinburgh University owned the building from about 1940, before we took over in 1977. Since then, we’ve continued the work that Maria Short and Patrick Geddes started, plunging you even further into a world of science and wonder and continuing to display those incredible 360-degree views over Edinburgh through our Camera Obscura.

Camera obscuras across the world

Did you know, our Camera Obscura isn’t the only one still in use today, there are several others across the globe: View this image bigger here. 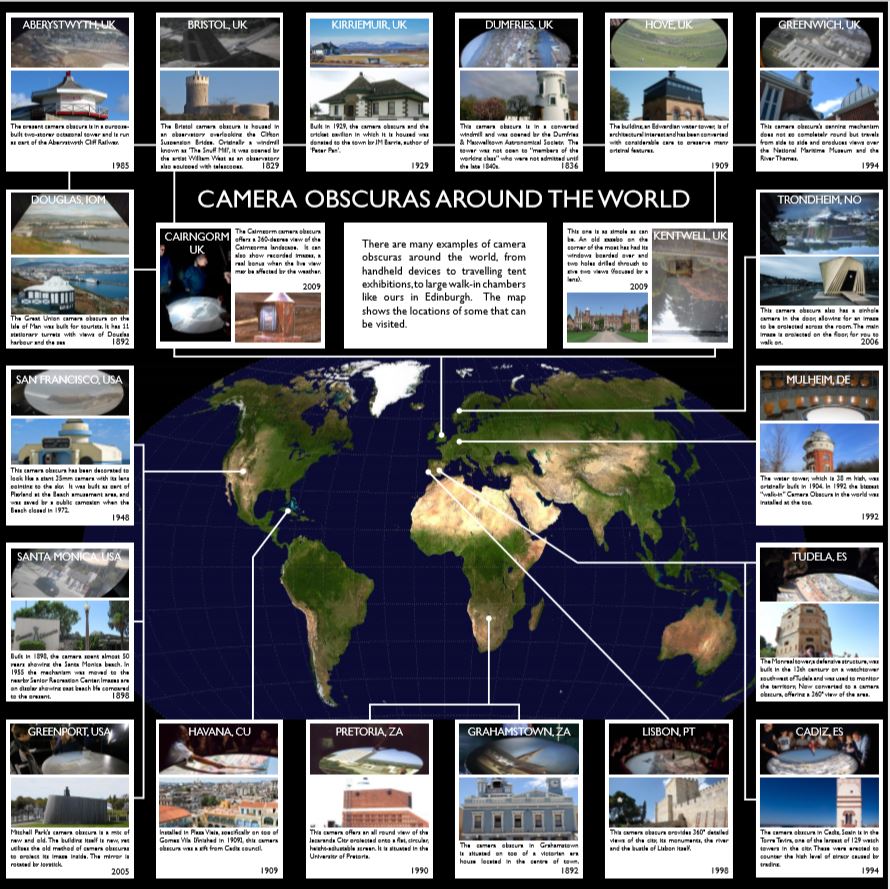